Please upgrade your browser.
Unfortunately, Internet Explorer is an outdated browser and we do not currently support it. To have the best browsing experience, please upgrade to a newer browser.
Bright, friendly rooms create an atmosphere of well-being for children.
Infos
Date 09. June 2020
Press liaison

"We were very enthusiastic about how well we were supported by the ELA Container team in the planning and construction of our new interim day care centre. Bärbel Völker is relieved. As commercial manager of Terminal for Kids gGmbH, she builds and operates kindergartens in the greater Frankfurt area. A great challenge, because the metropolitan region is booming. And the local infrastructure does not always keep pace with the rapid population development.

This is also the case in Kelsterbach, a small town in Hesse - located between Frankfurt, Darmstadt and Rüsselsheim, in the immediate vicinity of Frankfurt Airport. In the last three years alone, the city has seen an increase in population of 6,000 new residents. The problem: the childcare and educational institutions were not able to keep up. 100 daycare places were not available. 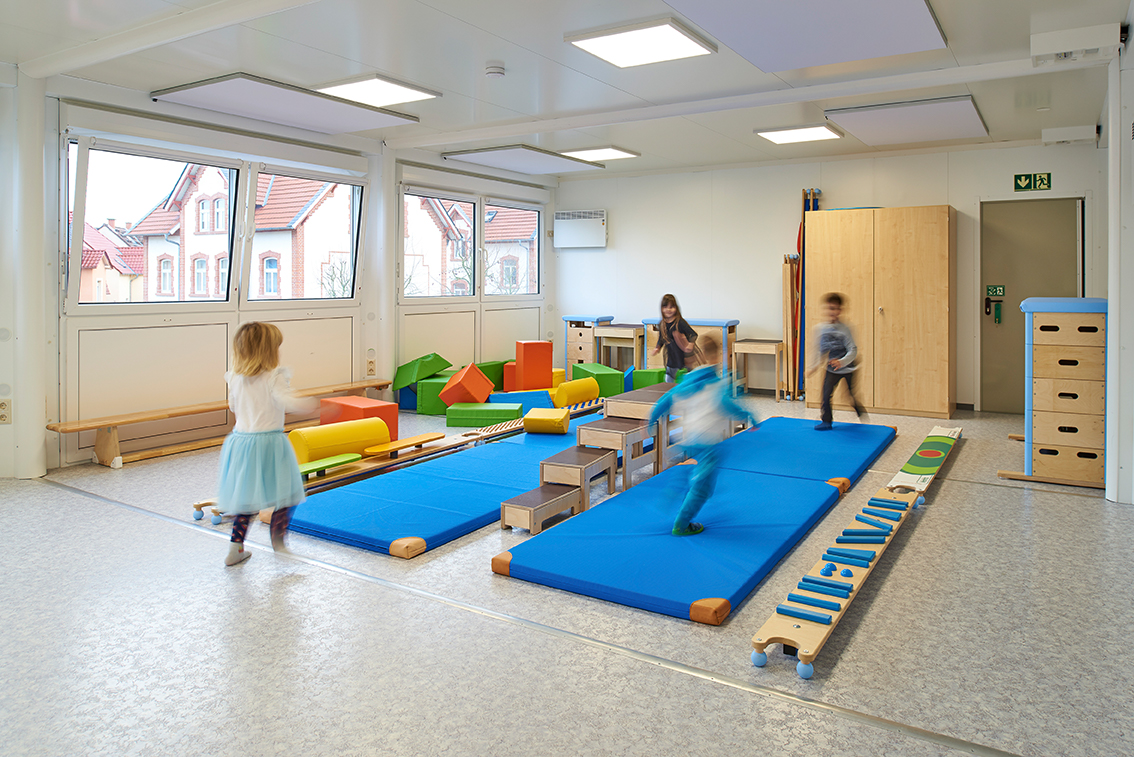 The spacious container facility offers plenty of space for the children to romp and play. 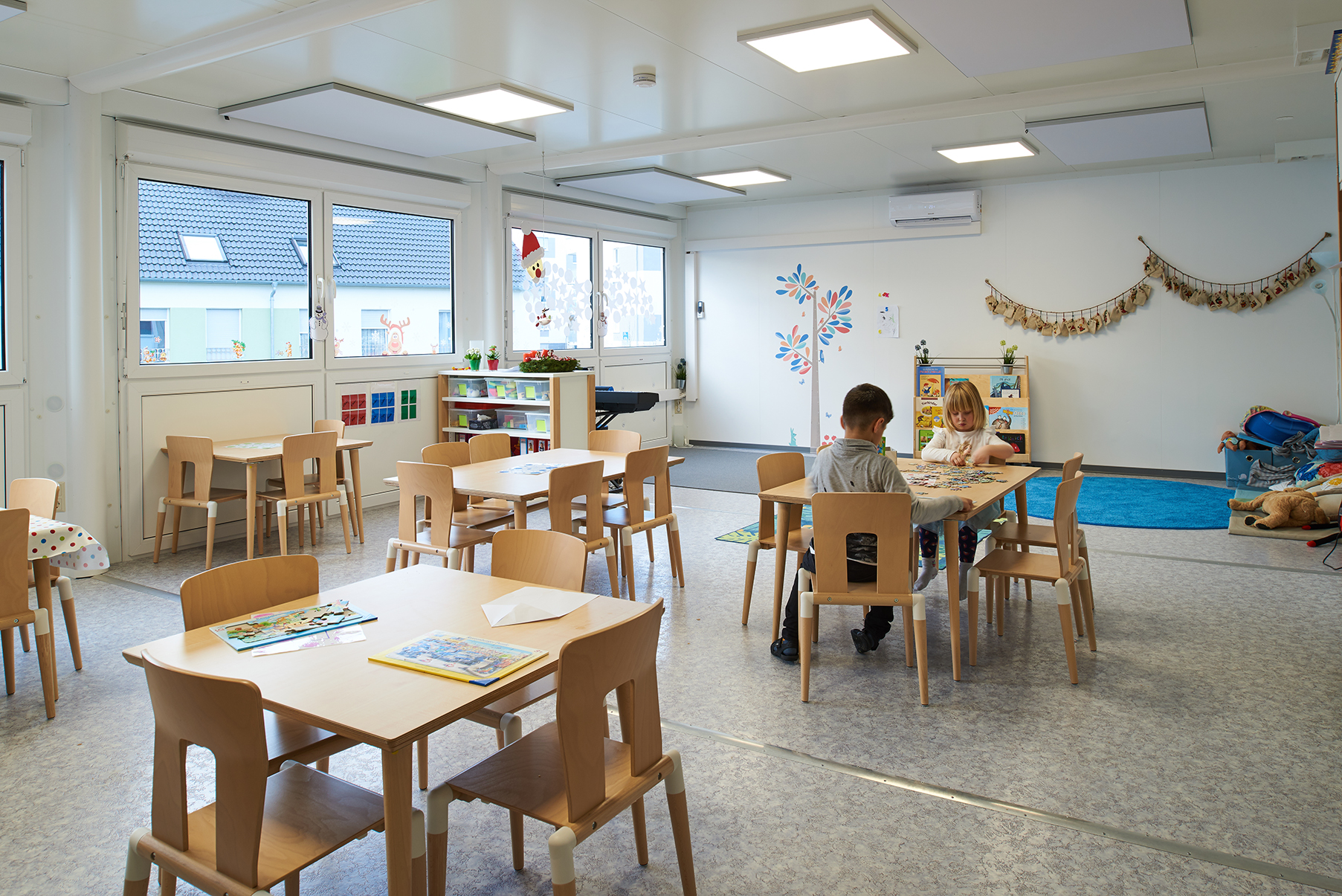 An emergency that the kite-operator Terminal for Kids wanted to eliminate quickly. A quick and convenient solution was needed. Requirements that ELA Container fulfils particularly well with its mobile space solutions. The challenge: to create space for six kindergarten groups for children aged 1 to 6 years in the shortest possible time. 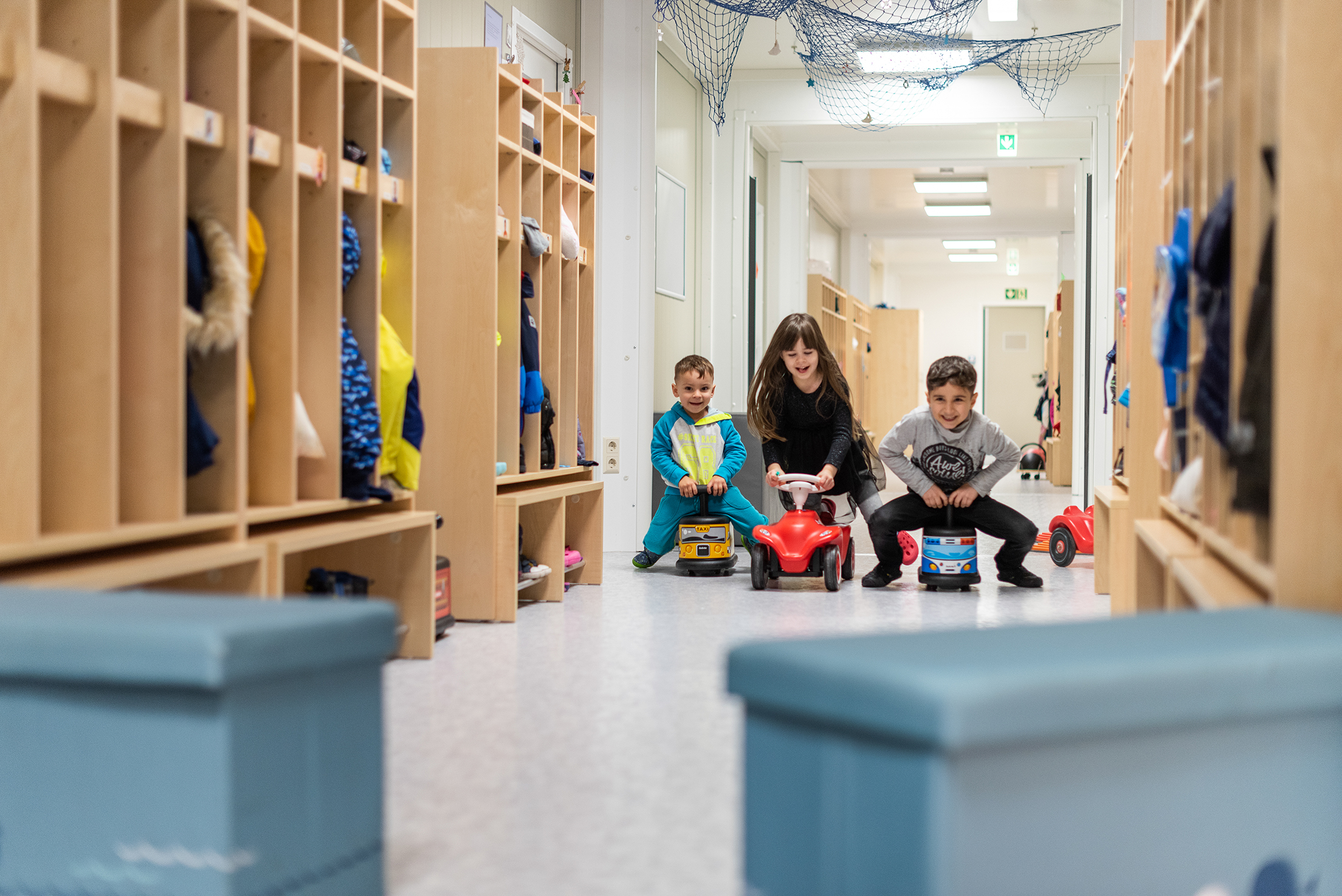 The wide corridors made of ELA containers even make a small car race possible.

The interim KiTa MainSchiff was created within a very short time. The fact that the move into the facility could take place on time is thanks to ELA Container's flexibility, explains Bärbel Völker: "Despite good preliminary planning, it was extremely tight due to approval processes for the desired opening date, but the ELA team managed to set up and technically equip the containers within a few days, so that we could move in on time with the children.

Twelve children are cared for in the crèche groups, up to 25 in the kindergarten groups, and a total of 137 children had to be accommodated. On more than 500m², 40 premium rental containers and ten quality all-rounders were used on two floors to create a facility that meets all the requirements of a modern kindergarten. In addition to the six group rooms, there are, among other things, sanitary rooms for children, a sleeping room, two educational rooms and further rooms for technical matters on both floors. 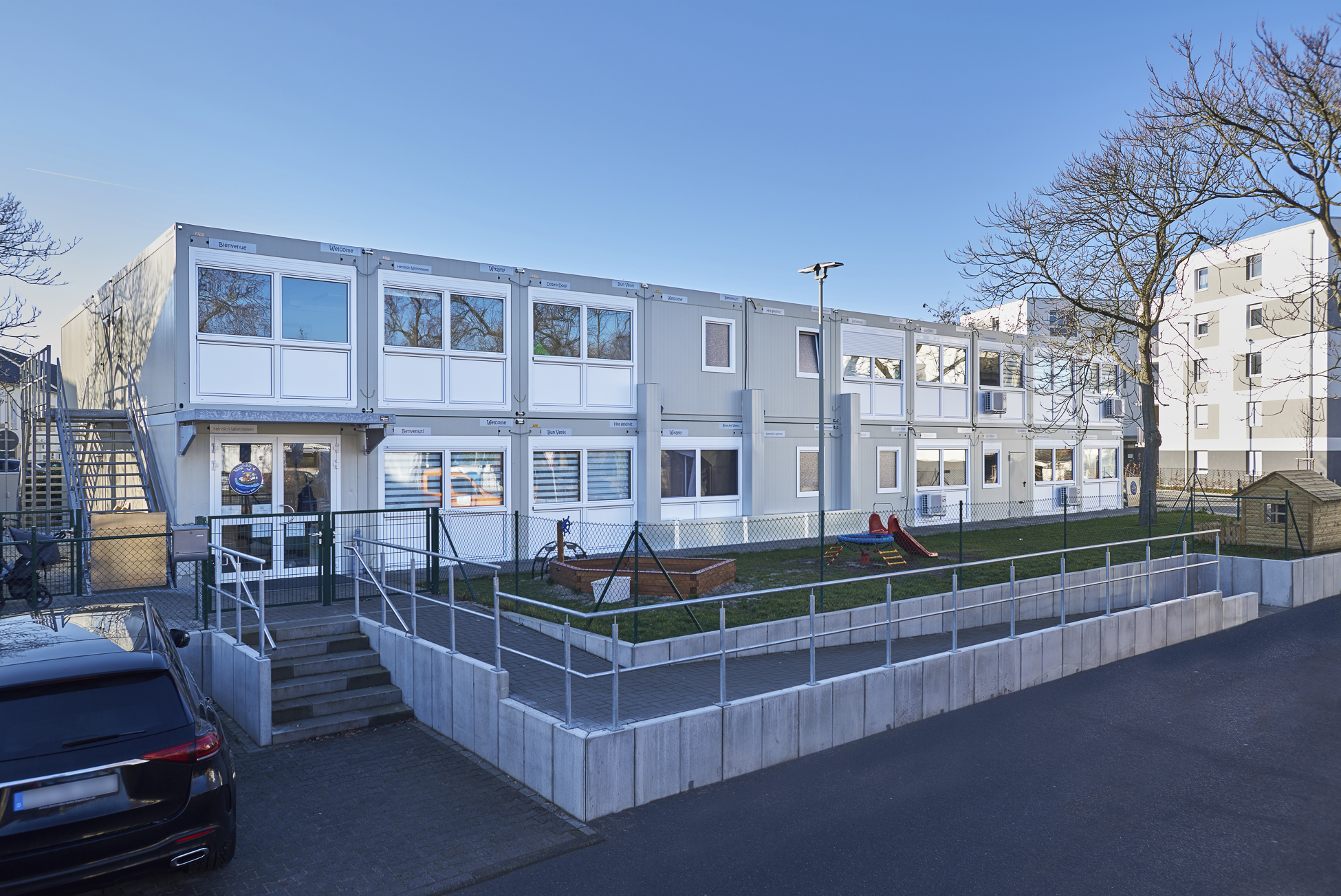 On two floors a facility was created that meets all the requirements of a modern kindergarten. 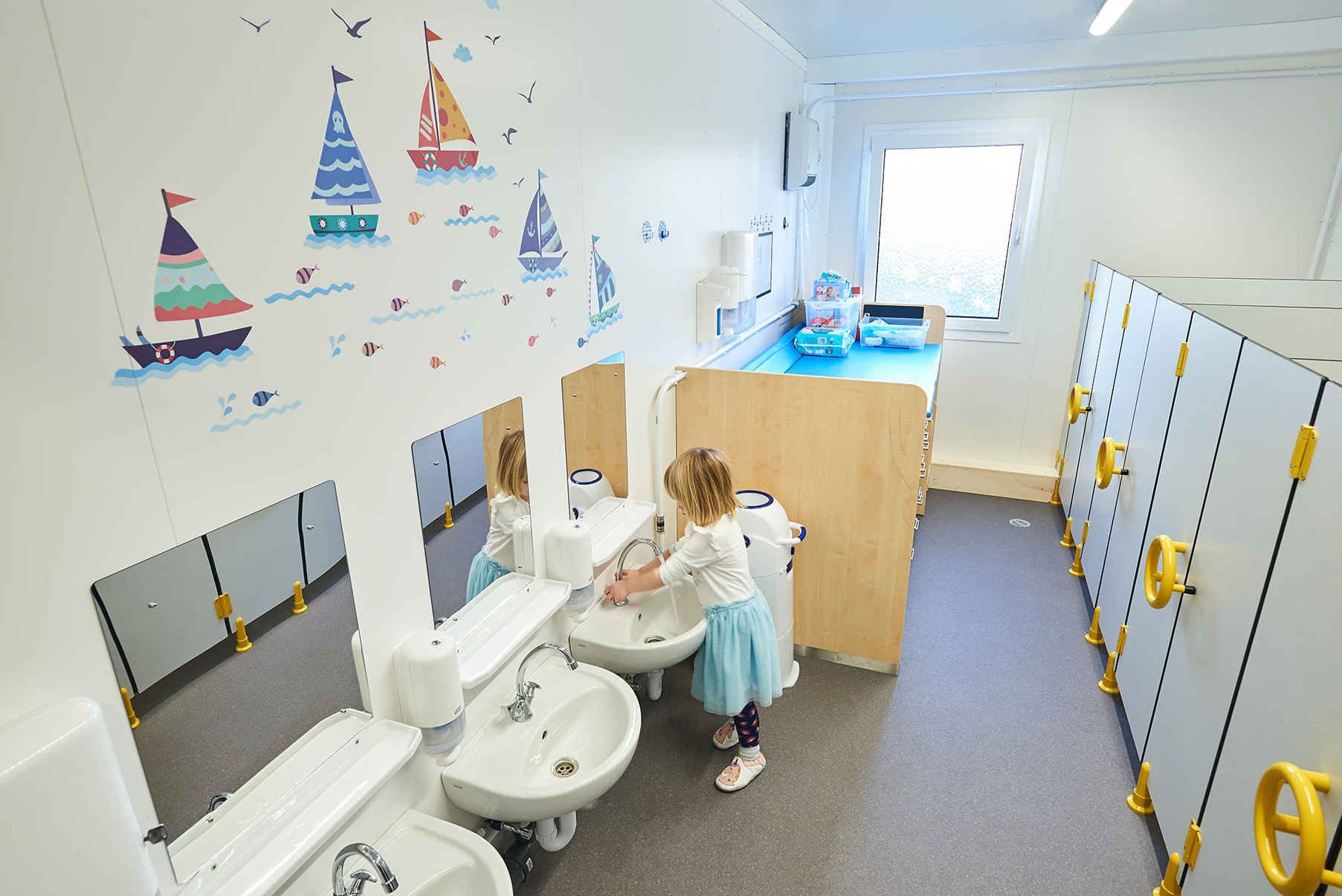 When furnishing the kindergarten, care was taken to ensure that the premises were suitably equipped for children.

When furnishing the kindergarten, care was taken to ensure that the premises were suitably equipped for children: Low toilets and washbasins in the sanitary rooms and electronic door openers make the facility barrier-free for children. Ceiling sails ensure good acoustics in the rooms. Escape route signs, panic locks, childproof sockets and networked smoke alarms ensure the safety of children. The result is a feel-good room in which parents are happy to have their children looked after.

"The acute lack of childcare places in Mörfelden-Walldorf is not an isolated case in Germany", explains ELA Area Sales Manager Julian Schreiner. He is receiving more and more enquiries from the public sector, especially in the education sector. "Containers represent an optimal solution here," says Schreiner. "The MainSchiff kindergarten shows that with our container systems we are able to create space at short notice where none has been before".